Puppeteer and outside eye Renaud Herbin

At the beginning it was a dream, the dream of a woman. Channelling Kafka and Lewis Carroll, a dream – memory – nightmare in which from a corrida to a child’s game, from birth to death, this woman moves through a destructured family with its own tangle of neuroses. Fraternal rivality, rabid maternity, power-mad relationships with a ready-made scapegoat, unfulfilled mourning, aging children, mistreated old age… Birth, marriage and death are present in the piece as initiatory signposts. If these rituals are hijacked and transformed, it is not the same for time, whose unstoppable forward drive continues to remind us of our own demise into dust! The actors “speak” with sounds and sighs, and when they do use words, it is in an emotional, imaginary and interior language, which seems foreign yet entirely recognizable and comprehensible.

“Mixing the magical and the burlesque, Poudre is a small object which seems to have come out of a music box.”

“Poudre! is the title of the first piece directed by Julie Berès, a mix of gravity and lighness on the stage of the small theatre. There are seven actors onstage, men and women, captivating their audience. Without saying a word.”

“Led by Julie Berès, a unique universe is revealed, chasing the nightmares of a child who is subject to those of the family. […] Somewhere between Kafka and Lewis Carroll, between pure imagination and the unconscious, while a series of strong, beautiful images repeat themselves in an obsessive loop – which does not exclude poetry.” 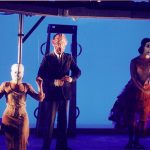 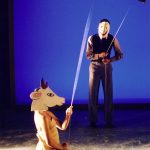 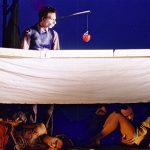 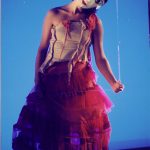 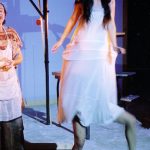 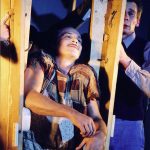