Assistant to the director Mirabelle Ordinaire

This is Julie Berès’ first entry into the opera world. She was invited to direct Orfeo by the Opéra National de Paris, which brought together for this new production soloists from the Académie and the musicians and chorus from Les Cris de Paris. There is a slight experimental quality which works well for this favola in musica (musical fable), composed by Monteverdi in 1607; it was considered so experimental in its time that now it is seen as the first true opera in music history. At the heart of Orfeo, there is the unending, essential quest by Man seeking eternity and infinity in spite of his mortal, fragile nature. There is a dialogue of shadows and light in this millenial myth. Using all the resources of the stage space in the large Bastille Opera space, reinforcing the fable by projecting animated cartoons, Julie Berès makes Orfeo into a veritable initiatory voyage.

“A handsome Orfeo, young and experimental, in the Bastille amphitheatre.”

“After a superb fixed overture, the scenic equivalent of an orchestral unison, Berès’ direction offers stunning moments of vivacity against a bucolic setting of grass and tree trunks in a delightful green marriage scene between Orfeo and Euridice.”

“Under the energetic baton of Geoffroy Jourdain, an ingeniously simple staging by Julie Bérès and with a number of magnificent voices, this little jewel is an enchanting event, full of life and dreams we aspire to. […] Young, sensual, present and vibrant, baroque in the best sense of the word, this production of Monteverdi’s Orfeo is a true delight.”

“Somber, including the first act which includes the marriage of Orfeo and Eurydice, the setting offers several extremely beautiful tableaux: Music’s appearance in her gigantic celestial dress and the funeral wake with its candles, the bodies of women lying on a table, dead in the eyes of the Hero.”

“In her maiden voyage into opera direction, Julie Berès succeeds handily, with the assistance of Mirabelle Ordinaire (from the Académie), blending animation and fantasy, which are in theory not easily mixed. The stage is covered with green grass, with large boxes and animal skins spread here and there, with individuals in rags performing exaggerated movements in camped-up situations. The clever lighting (by Cathy Olive) and spirited choreography (by Stéphanie Chène), enliven this well-directed piece.” 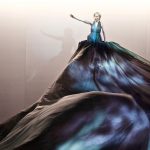 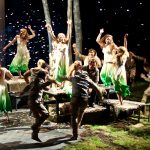 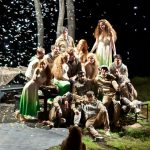 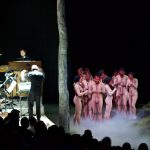 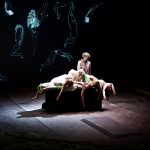