With artistic collaboration from Ariana Vafadari for voice work, Frédéric Gastard for the musical arrangements, Nathalie Régior for wigs, and Samuel Lefeuvre

The company Les Cambrioleurs is a registered company recognized by the French Ministry of Culture and Communication/the DRAC Brittany, the Brittany region and the city of Brest, and its projects are supported by the Conseil Général of Finistère.

How can we talk about aging, about losing our memory? Julie Berès evokes this delicate situation in Lendemains de fête, in which we see a former musician facing his memories, dreams and desires, as well as the tenderness which exists with his partner, Marie. Childhood memories and dreams crisscross and jostle each other, rebuilding the bits and pieces of a life. Time periods blend together, fall apart and become confused, the journey of a man whose memories are being stripped away. His interior labyrinth is filled with rediscovered bodies from his past as well as fantasized ones from his imagination.

The production uses a number of older actors interspersed with the acrobatic movements of young circus artists, texts, bits of baroque music and projected images. In this exploration of aging and memory loss which is alternately grave, tender, quirky and melancholy, the spectator is fascinated, watching reality transform itself, fleeting, mixing itself with dreams and the imagination.

“The plurality of senses and dimensions, the construction of a web of multiple sensorial stimulations culminating in a complex, layered piece.”

“Julie Berès manages to inject brilliantly into her spasmodic production the poetic rhythms conjugated by the beats of several hearts of varying ages, showing us slices of real life, with nary a whit of moral judgment.”

“Adroitly mixing disciplines, Julie Berès explores the imagination of old age, somewhere between malice and gravity. […] Using a subtle blend of theatre, choreography by Stéphanie Chêne, circus arts, with the young artists Matthieu Gary and Vasil Tasevski, and music, the performers in this extravaganza render poetic the agonies of physical decline, memory loss and the other torments of the elderly. […] The aging process in Lendemains de fête touches on all the nuances, all the important points.”

“Imbued with a strong sensuality, Lendemains de fête is a hymn to the texture of the skin, the pleasuring of bodies, the vitality of hearts, the strength of love over death. […]  Lendemains de fête is visual, sensorial, burlesque, philosophical, explosive, melancholic, bitter. A creation you need to experience in close proximity. 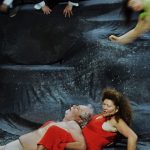 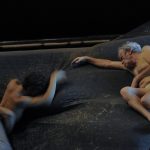 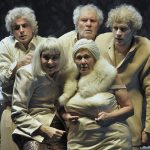 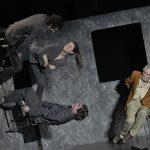 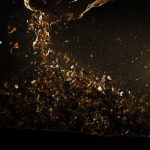